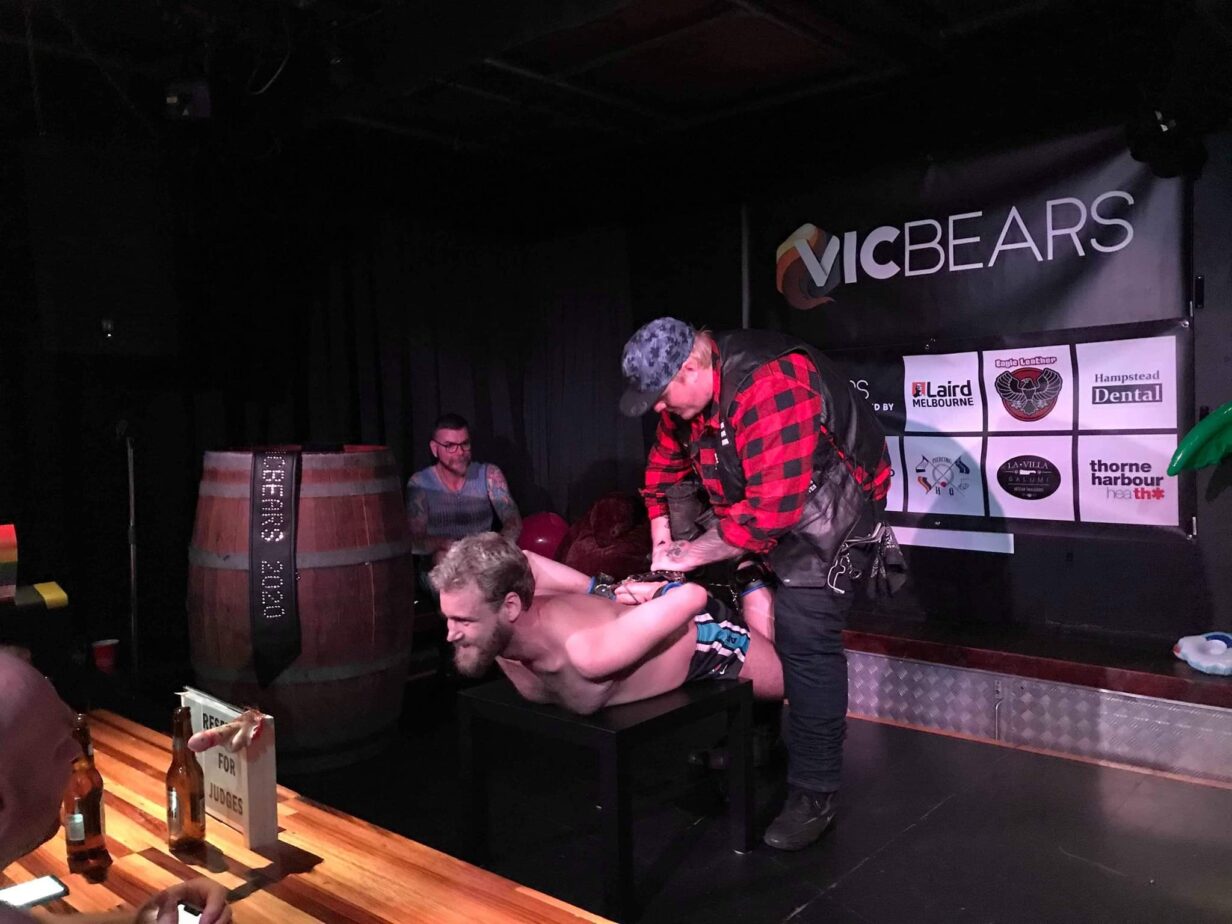 The photo displayed is from Mr VicBear 2020 competition in January 2020. I wasn’t a competitor, just helping a friend with their fantasy section. I was actually supposed to compete, but due to sickness in the family, I had to rush back to Perth and was away a lot longer than expected. Anyway!

I thought I might write about why on earth I’d get up on stage, wiggle my ass and compete to become Mr Perth Bear for 2021. Considering getting up on stage has never really been my ‘thing’, it might seem odd that I’m willing to do such a thing just to win a sash.

But that’s just it, it isn’t just a sash.

But, for better or worse, the members, the people within a club or group, aren’t always what people look at when they examine that group. You can see this in all aspects of life. We often judge a group as a whole because of one or two prominent people. Like how I’m guessing many in France are judging Australians because of our inept Prime Minister.

So, why exactly does that make me want to compete for the sash? Lets go back a little, I’ll try not to bore you!

After a few years of living in Melbourne, I struggled to find friends. People that I really connected with. Being in a city that was so far away from home was obviously quite isolating. After a few years of my own need to accept myself (which you can read a little more about here) I eventually joined VicBears. My first experience was a BBQ at Northside Bizzare.

This was honestly a lot of fun. I got to meet a bunch of really awesome people, socialise and it got me out and about doing something. It got me out of the house.

Fast forward a bit, I started joining in more and more club activities, until I eventually joined the committee. The friendly people in VicBears really helped me find my way in this new city, where I met a bunch of really great people I call friends. People who I will never ever forget.

Unfortunately, COVID hit. Given that there’s been no end in sight, and given that my family is all here in Western Australia, I made the decision that I would return to my home town in WA. It was an extremely tough decision as I have a lot of wonderful friends over in Melbourne. I had a club, people that I care about deeply. But the isolation was killing me and being so far away from family was also upsetting.

Now, I did still have friends here in Perth, but I did miss the kinship and the love from the bears. So one night, a friend of mine, Dodger (who I met in Melbourne when he visited in, I think, 2020, just before the human malware became a problem), invited me to the Perth Bears Den Night. So I obliged.

I mean, initially, I was nervous. Meeting more new people in a city I hadn’t called home in about 6 years. There was also the whole feeling of “oh god, it’s Perth’s tiny little bear club”.

Well, I met some absolutely lovely people the first night I was there. Another great group of people who were more than willing to make me feel comfortable, to include me, to make me feel at home again. It is wonderful how at peace I felt after that night.

It really was amazing how similar, yet how different the 2 clubs were. But the most important thing they have in common is the warm, welcoming members who are always willing to include new people.

Now you’ve got an idea of what my experience was like with the bears.

Why am I running for Mr Perth Bear for 2021? Because I want to be a positive representative for what the club did for me when I joined, and to represent the positive, inclusive and friendliness that I felt when I first came to a Perth Bears event. More importantly, I want to show everyone that it is the people, the members, that really make the club and make people feel welcome.

I also want to represent something else, something that I feel is significantly important given the world today. I’m a flawed person. I’m not perfect. For starters, I’ve not always been an accepting person, even having suffered from self-hatred in the form of homophobia. I’ve previously held negative views on inclusion, said terrible things.

Those are things I can’t take back. Things that make up my past that I’m not proud of. I have written about this previously. I encourage anyone who wants to, to go back and read about it (parts one, two and three). But the title is apt, I can’t change who I was, I can only be better tomorrow.

But yeah, that’s me. That’s why I’m in this competition and why I’d love the opportunity to wear the sash and represent Perth Bears.

Having met the previous Mr Perth Bear, Mitch, and Mr VicBear, Josh, they’re both awesome people who also deep down have a huge amount of love and respect for their clubs. Josh has and continues to represent and drive diversity and inclusion within VicBears, through one of the toughest years for Victoria. He’s a confident, friendly and genuine person who I have a huge amount of respect for.

Mitch brings a bubbly positive and fun attitude to the way he represents Perth Bears. He’s loud, proud and always cheerful and one of the many people in Perth Bears that made me feel so welcome.

Neither of those beautiful people perform their roles in the same way, with different attitudes and different ways of doing things. I appreciate and deeply respect the way they’ve represented their clubs. I love how they both put their own spins on their roles and how they represent their clubs. If I’m lucky enough to represent the club, I hope to put my own spin on it and make an impact myself in the role.

That said, my fellow competitors are lovely, genuine people who I would not be upset to see win and represent the club. Any one of them would do an excellent job filling the sash and represent Perth Bears. I look forward to meeting them in person and seeing what they’ve got in the competition. Even if I don’t win, I’ll get to experience something awesome with an awesome group of people.