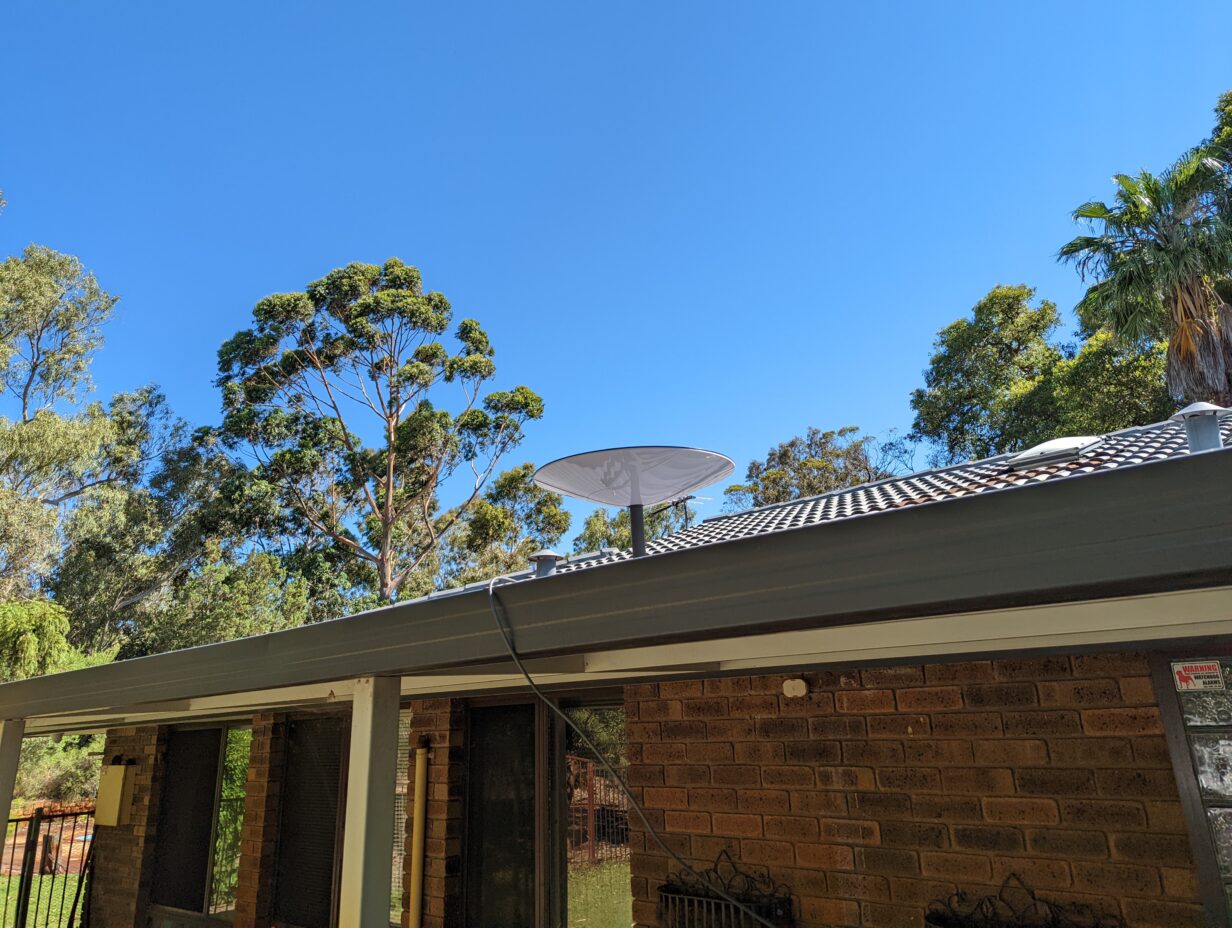 This is my initial thoughts on the Starlink service from SpaceX. I’ve only had around 4 or 5 hours of time with it so far, so this is more thoughts and opinions than a thorough review.

One of the most terrible things about moving back in with the parents has, hands down, been stuck on ADSL1. In an area that’s not rural enough to be an NBN priority area, but not built up enough to be, err, an NBN priority. The best we can get is very expensive NBN satellite, or hope that the 1 quarter of the house that’s covered by fixed wireless isn’t too far away.

Back in however long ago it was, a very long time, I put my address for an invitation to register for Starlink by SpaceX. In March, I was then invited to pay $130 as a deposit for a potential connection in ‘mid to late 2021’. Mid 2021 passed, nothing was heard. I had assumed that it would be pushed to 2022 given the chip shortage and my luck when it comes to any sort of internet access at home.

Well, late 2021 arrived, and with it came an early christmas gift!

Well, I’ve not had a hell of a lot of time to test it so far. Right now, it isn’t set up in it’s final position and is getting a whole lot of disconnections. It probably doesn’t help that this morning, I got up to find that it repositioned the dish to stare almost directly at a palm tree.

So yes, the disconnections were frequent, but surprisingly not as annoying as you might expect. The app claimed about 18 minutes of ‘unknown’ interruptions during a 4 hour period, which seems like a lot. This didn’t surprise me given that I’ve installed it in a pretty poor location surrounded by trees.

That said, when I initially set up the unit, it pointed itself straight to the sky. The next morning, it had repositioned itself like this. I can only assume that throughout the first few hours it tries to reposition itself to get a better signal and less dropouts.

The dropouts themselves don’t seem to be particularly fatal, even if they do last some time. If it loses connection, it seems that the handshake is extremely fast, so a signal loss doesn’t result in extreme amounts of waiting. This is something that can be problematic with traditional satellite services where a disconnection can mean several minutes of signal loss.

What’s more interesting is that, for the most part, the signal losses aren’t really noticeable unless they extend for tens of seconds. Streaming services such as Amazon Prime, Netflix and YouTube seem unphased by the loss of signal except in the fringe case where the loss lasted around 25 seconds or more. Watching the traffic graph, it seemed that each streaming service would pull a shitload of video into it’s buffer, then go quiet. You’d frequently see bursts at around 19 to 50mbps when streaming, then nothing.

Browsing online was fine, with the occasional delay when loading pages if the signal dropped out. It was noticeable, but compared to the original ADSL connection at the house, it wasn’t insufferable. The actual throughput was significantly better though, providing you are near enough to the wifi router.

So far, the router has been a very dull, if not pretty crappy piece of hardware.

I honestly don’t know much about the specs of the router at this stage. I’ve not found out much about it, but as far as features are concerned, it is on the budget side. It has 2 gigabit ports, 1 for Dishy and another that’s blocked off. I don’t know what the 2nd one is for given it is marked as AUX.

It appears to be a wifi 5 capable AP. It has 2.4ghz and 5ghz and uses a common SSID. As far as settings are concerned, you can split the SSID, enable WPA3 and change the SSID. That’s about it. There’s no web interface (trying to access one redirects to the Starlink website). It is powered by some form of PoE like Dishy, using a common PoE injector that’s conveniently colour coded.

The router will be something that I’ll be retiring very quickly. The range on the wifi is terrible, with my laptop in the next room seeming to only be able to get a very harshly low signal that’s allowing a grand total of 3mbps up and down.

My opinion on the router is that if you’re on a rural property, which the Starlink service is directed towards, then the router is not going to be adequate. The wifi range combined with seemingly no additional ethernet points means that this thing won’t offer decent coverage of a decently sized rural house, let alone the property. Just as an example, we have 4 Unifi APs on the property and that’s just to cover the house and the main workshop.

I would imagine other rural users would want something that allows additional access points so they get some coverage around the house, but that might just be me.

Once I’ve set it up properly, I’ll be doing a much more thorough review on the system as well as some more performance tests. I’ll also explore the features in a bit more depth. Keep an eye on my YouTube channel as I’ll be putting up some videos on the unboxing, as well as looking at setting up a PFSense router to replace the existing unit.