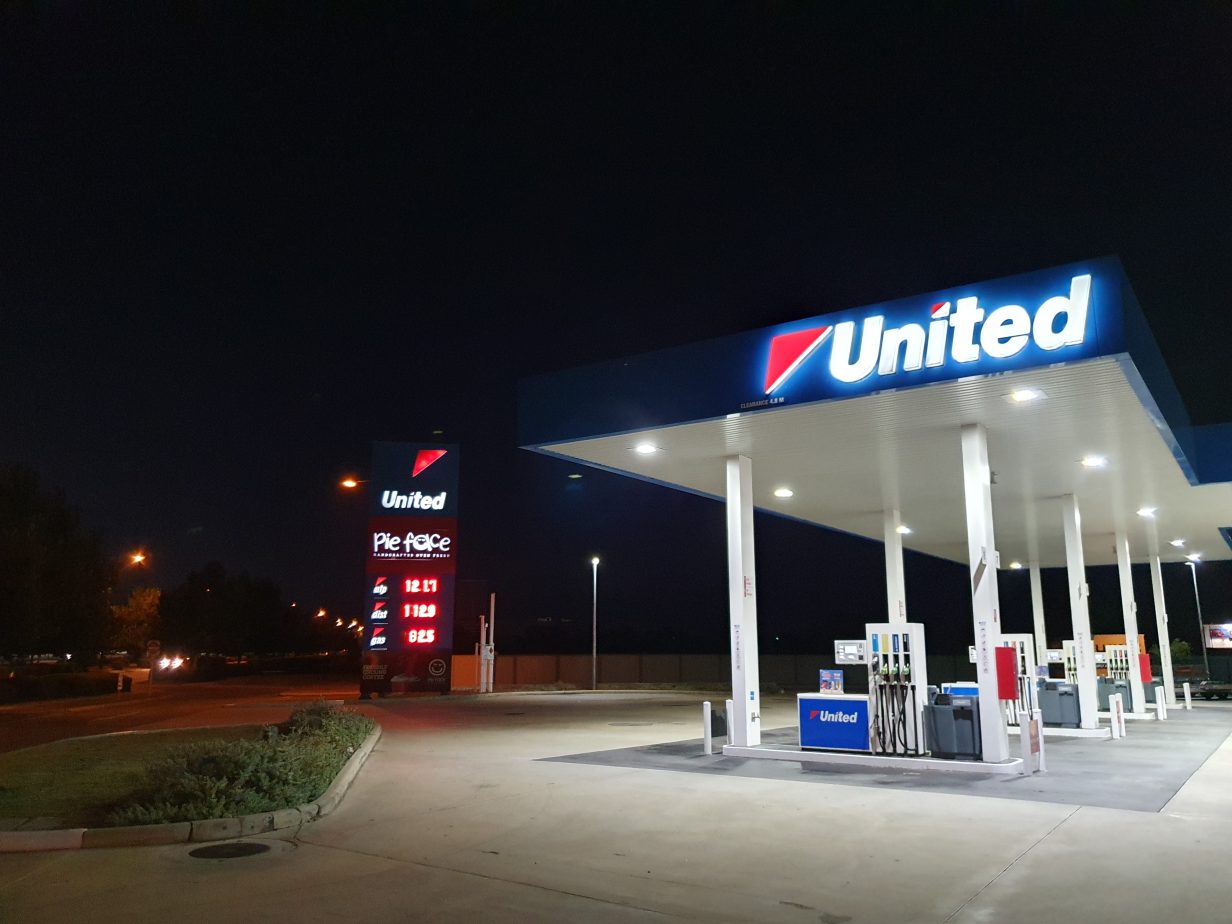 Firstly, I’m not normally the kind of person to get salty after working in a job that has a bad manager or bad management. I’ve worked in plenty of places like that before and I’m sure, given I’ve got at least another 30 years of working career left, I will do it again at some stage.

Also, this isn’t about my current employer. I actually quite like my current job and work for a company that I do believe has a lot of potential. But I won’t get in to that.

Today is about a little Australia retail fuel company, a company run by an unpredictable and often abusive man.

First day at United, at their head office on Hoddle St in Abbotsford. It was a nice enough building and the people there seemed friendly enough.

Though everyone was friendly and did their jobs without complaint, there was always an odd feeling around the office. A nervous feeling. It was hard to describe as a newcomer, it felt like everyone thought they were being watched. Almost like Big Brother was watching.

Honestly, I shook that off as nerves. Being the new guy in an office full of people who knew each other and had worked there for many years. I had my desk, and my job to do, and that was fine.

As the weeks went on and things settled down, I had heard people ‘warn’ other staff on the ground floor to look busy as the boss is coming down to see someone. This was, again, written off by me as a normal thing as some bosses don’t like seeing their employees sitting around looking bored, or standing at other people’s desks.

At this stage of my working life there, I was really a nobody. Low level position in the company and working on a temporary contract. It was fine, but I wouldn’t have considered myself as particularly important in the scheme of things, and because of that, didn’t have anything to do with upper management. So I was pretty immune at this stage to what turned out to be an absolute clusterfuck of management.

After a major problem with a payment system that nobody seemed interested in fixing (beyond complaining about it and saying how urgent it was), I took over the rectification of the problem and liaised with the people involved to get it fixed. This led me to managing a part of the business that seemed to had long been neglected.

It wasn’t a promotion in any way other than new job title and new responsibilities. But it was a better job title and was certainly a better position to be working in. Or so I thought.

After a few months managing this part of the business, with very mixed levels of support from my colleagues, I had, for the first time, been asked to meet the director of the company. Avi Silver.

At the time, Avi seemed pleasant enough. He wasn’t rude to me, disrespectful, anything like that. He had a task for me and another colleague, and needed us to fly interstate to do it. So we did.

The task we had was to inspect some of the sites owned by the company. They had started to run down and Avi wanted the sites to be cleaned up and rebranded so they all fit in with his vision, whatever that vision was during that particular time.

I had taken photos of all the sites in question, collated my results and was asked to present these findings. I thought at the time, honesty was what was needed. The photos didn’t lie, they showed exactly what the state of the sites was, and my presentation said that.

At no time, did I lay the blame on anyone as to why things had deteriorated. Obviously, it wasn’t me that caused this as I had only worked in the role for a few weeks and this was years of neglect. I honestly didn’t know who had been responsible anyway so it wasn’t like I could blame anyone or ‘throw someone under the bus’ so to speak.

But, during this meeting, where some of the other management team had been there, Avi became furious. How could this have happened to his precious sites? He began shouting (quite loudly) at everyone in the room, blaming them for this deterioration, and what had happened to these sites.

He was pissed off. But the manner in which he treated his staff was horrific. Shouting, blaming them, swearing. This was a tyrant verbally abusing people he felt were inferior to him.

Defend Yourself, Fuck Everyone Else

This was the mentality of those who worked in any significant positions within United. If something went wrong, find a scape goat and blame them. People were your friends until they were not.

It was a horrible mentality. One that I experienced many a time. It was also something that I had to do a number of times.

Avi always wanted someone to blame. Always wanted someone who’s head he could chop off if something went wrong. There were no small issues that could be resolved with a bit of training and some talk. No, everything was shouting and blaming with him.

If you wanted to avoid being in trouble, then you’d document everything. Every request would be written in e-mail, or signed off by someone else. If you couldn’t prove it wasn’t your mistake, then you’d be in a lot of shit and getting chewed out by Avi in front of whoever was sorry enough to be there at the time.

Not to say that everyone would throw you under the bus. There were a few good people there.

But with a few good people, came the opposite end of things. The terrible people, who would without hesitation throw you under the bus just because they were in the position to do so.

Nobody embodied this like Avi Silver’s little pet lap dog. David Szymczak. David, on and off (depending on Avi’s mood) was 2nd in command to Avi.

On the topic of that mood and where David Szymczak stood in the pecking order of things. Avi was just as brutal and just as savage to David as he was to any other employee. If David couldn’t deflect the shit coming his way, he would wear it. So, depending on how pissed off Avi was, would depend on where David sat in the pecking order.

If something did go wrong and David was up for the blame, he would find someone who was likely to be involved and unlikely to have supporting documentation to show they weren’t to blame. This often was me. At least in the beginning.

After a while, I learned David’s tactics and I learned to keep everything documented so when shit did hit the fan, and David tried to keep himself out of trouble, I could deflect everything back on him. He hated this. I hated having to do it. It was exhausting.

But we had our little dance. He knew that I knew what he was like and the bullshit he tried to pull, which meant I could outwardly show him no respect. We had many shouting matches in the middle of the office that had a net result of nothing because neither of us had the upper hand on each other. It was hostile.

When David did get in trouble and was moved around to be further from the top, this pissed David off. His power kept being taken away and given to someone else, which meant that someone else was the enemy. A desperate and jealous man.

Avi’s attitude and abuse, combined with David’s constant changing in the pecking order and jealousy influenced a number of management positions within United.

Not many people could tolerate the abuse that Avi throwed at them. Going in to meetings where the owner would throw a rate 1 tantrum and start abusing you every time the smallest mistake was made was not something people from the corporate world were used to.

By some miracle, United seemed to attract some very talented individuals from very large companies who wanted an opportunity to work at a smaller Australian owned company. These were people who already had a name for themselves.

They’d last months. These bright-eyed and extremely talented people with all the right ideas, absolutely destroyed by the culture that is United.

Avi’s abuse was one thing, and usually the main factor in a number of exits. But it wasn’t the only reason.

If someone had just started taking over some of the work that David Szymczak used to do, such as when they decided to have 2 Chief Operating Officers for different parts of the business, or if someone was working under that person, David would be on to it. Using his position to undermine others, making them look incompetent and pointing out to Avi every single little mistake that person made.

It was petty, it was childish and it was an art that David was extremely good at.

If Avi didn’t destroy them, David would.

After a couple of years of working for United, I left. I was free.

I moved to a new company. It was surreal. People were professional and even helpful. If a mistake was made, you weren’t shouted at or abused for it. People had civilised discussions with each other and didn’t throw each other under the bus.

After the years with United, it was a shock to work for a new company that didn’t employ bullying tactics and abuse as a strategy for getting the most out of their people.

Everything in this piece is based on my own observations and is true to the best of my recollection. My experience may differ from that of others at the company.